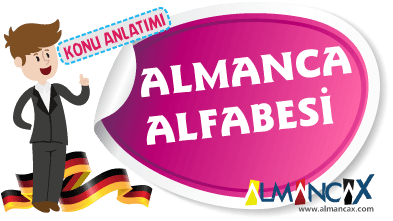 For who: Primary and secondary education students, 9. Class Students, Beginners in German

After carefully reviewing your German alphabet, we recommend that you solve the mini-test at the end of your position. Now let's start by examining the German alphabet by giving our headings.

In German, there are 26 letters and 4 special characters. The special characters Ä, Ö and Ü are the A, O and U letters of the letters (umlaut). They are usually not displayed in the alphabet but displayed separately.
The letter ß (estset) also means double s. In some places it is written SS (double s) instead of this letter. The letter ß is always small, and if it is big enough it is written as SS. In case of all the letters of a vein in ß, the letter ß must be written in SS.

Reading and Coding of Letters in Almanci

Now let's see the letters in German alphabet, one by one: The letters in the German alphabet are read and coded as above.
If someone wants you to code your name, you need to code the letters in your name one by one.

The letters Q, W, X, Ä, ß in the German alphabet are not in Turkish alphabet.

Some letters are used side by side in the word and in general the following readings are used:

sp : If s and p are side by side severe pancreatitis read as

st : If s and t are side by side PIB read as

Exceptions to the above reading rules are slight except that in some words these letters come side by side, but there are different readings depending on whether the letters are found at the beginning or end of the veil.


In the following image, some letters are shown side by side to show how the words are read.

How to read German words? How to read German words?

Note: in the German alphabet ä, ü, ö letters (AUO) are the shapes of the letters that have taken umlaut (point).

Friends who do not have special characters on their keyboard can write these letters on their computers using the following key combinations.

Our non-Turkish keyboard can also draw Turkish characters in the following way:

You can write your questions and opinions about our German lessons in the AlMaxX forums or in the comments section below. All your questions will be answered by the AlMancax instructors.

Dear friends, To German forums As a member you can also share any kind of information about German.

Now that you know the German alphabet, German artikeller subject expression You can check out our tutorial.

If you do not know in which order you will follow the German lessons, German subject expressionsYou can follow our German lessons step by step.